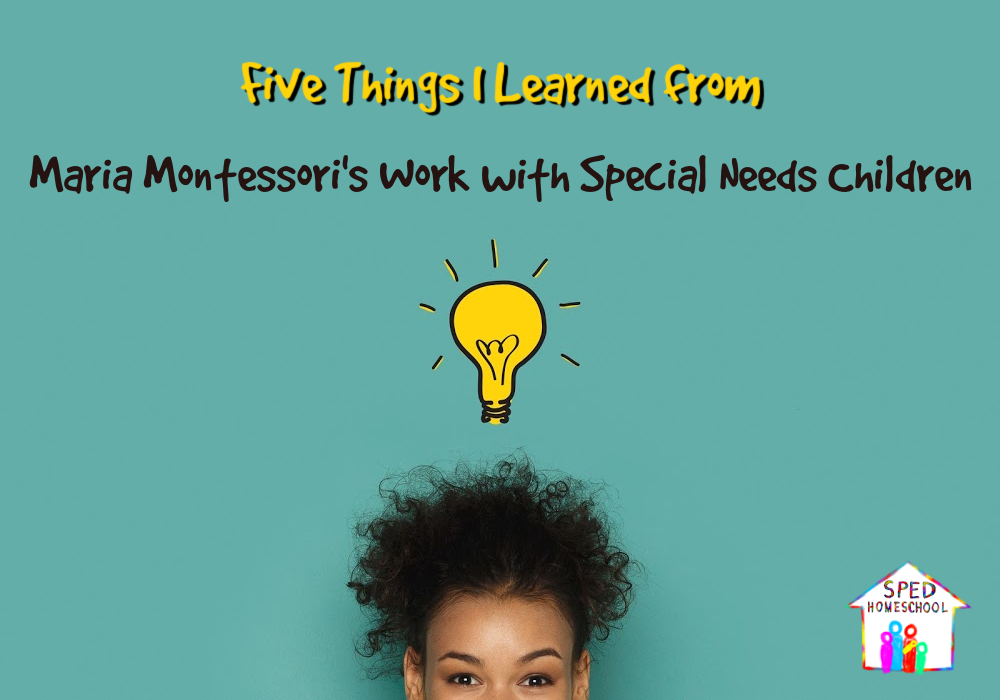 When my son was diagnosed with autism at five years old, I knew he couldn’t attend school. Even though we had always been around other children at church, play dates, library reading time, and mommy-and-me music times, my son developed a phobia of other children. He would have a meltdown or curl-up on the ground from fear when a child walked into the room. I had to homeschool him. My question in starting was, “HOW do I teach this child?”

You notice I didn’t say, “WHAT do I teach this child?”

The “what” to teach is built into every curriculum out there, but when I taught my son these “self-teaching” lessons, he would sit and fidget, not doing anything I asked.

Maria Montessori’s book, Absorbent Minds, opened the door for me. This book is not the Montessori Method most Americans associate with gifted programs today. In the early 1900s, Montessori had started her career teaching children with disabilities who had been institutionalized. Her students went on to test academically higher than the typically developing children of her day. Here are five things I learned from her time at the institution working with disabled children:

This may seem contradictory to you. The hand-over-hand method is when you gently take a child’s hands and guide them through an activity. With my son, I put a pencil in his hand and slowly traced letters. How is this having a child do something themselves?

You do not force a child to do this against their will. The task is completed together for children who will not reach out and try to do something independently. The hand-over-hand method creates muscle memory and neuro-pathways. Parents sometimes use this method intuitively when teaching young children how to wash their hands or brush their teeth. You can use this method to teach writing, typing, cutting, and many other skills. As a child learns the skill, you move your hand up their arm to guide their wrist rather than hand-over-hand. You may then have the child try to do the task one time alone before doing the others hand-over-hand.

The connection between hand-over-hand and independence made sense to me when I observed a classroom where the teachers were busily cutting and pasting an activity for teenage special needs students. The teens just sat and watched them. These students were not learning how to cut and paste. They were learning helplessness. It would have been better for the teachers to take their hands and help them do the activity themselves.

Using this method, my son learned how to write both print and cursive on his own. He has also become a fan of drawing Sonic characters from online tutorials.

Then Montessori took the red square and a red circle. She asked the most fidgety child which one was the square. The child couldn’t say.

Montessori handed the red square to him. “This is a square. Say square.”

The child held the square and played with it. He said, “Square.”

Then Montessori took the square back and handed the child the circle. “This is a circle. Say circle.”

The child played with the circle and said, “Circle.”

Finally, Montessori asked the child which one was the square. The child knew the correct answer.

For the special needs child, much of our curriculum is fluff. Cut the fluff and focus on the one thing you are trying to teach. If a child learns one thing during each lesson, you have accomplished something. That is often enough. Take education one step and one goal at a time.

3) Children learn through their senses

Montessori observed that children learn by touching, tasting, looking, and hearing things. We all learn this way. Many of us have know about visual learners, auditory learners, and kinesthetic learners who learn mostly through one of the senses. Researchers have discovered that even if that is true, the more senses we use, the better we learn something. The majority of Montessori’s methods revolved around “toys” that were child-sized. She was not a fan of worksheets. She believed that children learned best during play. This is their work.

This was a difficult concept for me to use. My son hated crafts and coloring. He was also so distracted by manipulatives in Math to the point he couldn’t learn while they were out. Through trial and error, I discovered that songs with movements worked well. Doing real chores (hand-over-hand at first) was great for him. We did science experiments, YouTube videos, games on the tablet, typing, play-doh, field-trips, flashcards, and felt-boards. We did cut and paste matching activities, timeline pages in a notebook. I researched ideas on TeachersPayTeachers.com for any way to teach the topics in our curriculum that required less talking and more sensory input. It took a lot of prep work, but it made learning possible for him.

4) Observe your child and record data

Montessori was a physician first and an educator second. She approached teaching like a scientist. She observed what a child was doing and recorded their developmental progress. Parents of children with autism may be familiar with ABA therapy’s method of trials and data collection. Speech therapists and Occupational therapists do this too. I highly suggest trying to do this yourself.

I did this by downloading a developmental list from some websites and checking off what my son had learned as he grew. I wasn’t grading him or comparing him to other children. I used this to know what we needed to work on next. One list I found focused on social skills. Another list was the Texas Teks that is used by public schools to design curriculum. Another list I found was for speech development. All of these were free. I would look at these lists every month to check off what he could do and date it. Then I would find a few things he couldn’t do to make our next goals and work on those.

Out of all I learned from Maria Montessori, the most important was her teaching relationship. She cared about the children she taught. She played with them and showed them new ideas with motivation and exuberance. When you are interested in what you are teaching, your child will soon become interested too. Don’t teach something that bores you to tears. Find the format of that information that you and your child can enjoy together.

I hope the lessons I learned help you as much as they helped me!