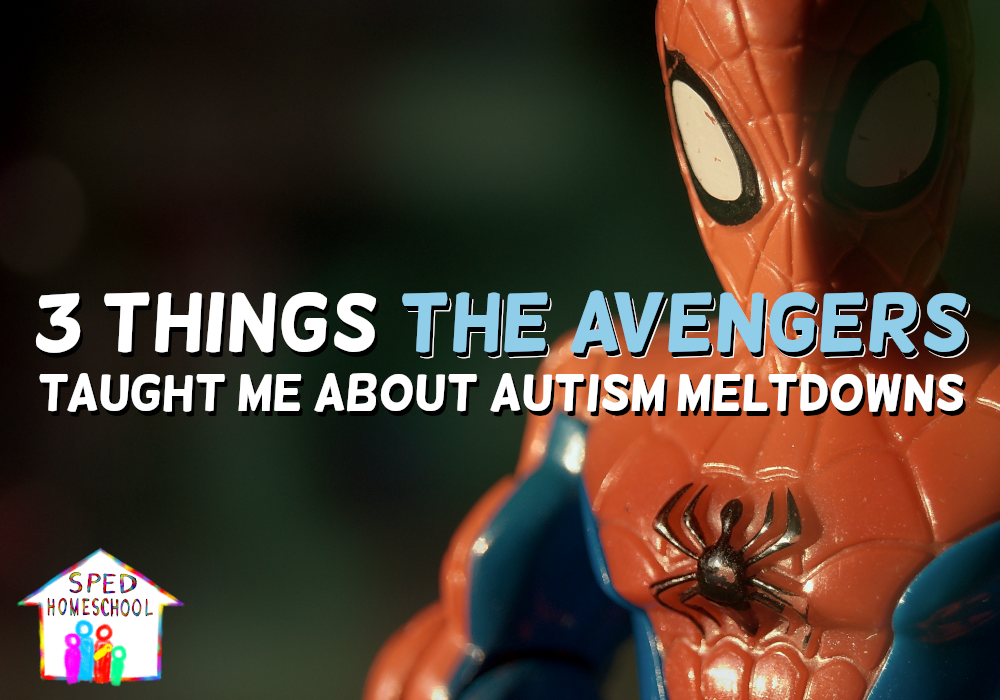 We are into all things nerdy in my house. This extends to superhero movies. And my boys are very into superheroes. They wear costumes more than regular clothes, and I have to address them by their character instead of their name or they don’t respond. Because of this, I have seen all the superhero movies. I am always taken by surprise though by how I can see parallels in my own life in these movies, and specifically what these movies show me about autism meltdowns.

One of these instances was the latest Thor installment: Ragnarok. Thor gets stranded on a planet where he finds the Hulk. The problem is that once the Hulk changes back into Bruce Banner, he has a hard time staying that way. Since they are in hiding, they need him to not change back into the Hulk, or they won’t be able to escape.

As I was watching, I was laughing thinking of how Thor’s method for helping Bruce Banner reminded me of living with a child with Autism. But once I thought about it some more, I realized that just as Thor’s behavior wasn’t really helping, sometimes mine doesn’t either. Here are some things we can all do a little bit better when it comes to dealing with autism meltdowns.

Develop The Relationship
In earlier Avengers movies, Black Widow and Bruce Banner form a relationship. Because of their relationship, she is able to help him change back into himself when he is the Hulk. She does this by speaking calmly, moving slowly, and letting him initiate touch first. She even has a phrase that she uses to signal to him that it is time to “transition.” Does that sound familiar? The important part of this interaction though is the trust that is built up between the two of them. She spent a lot of time making sure that he felt valued and safe with her, and it took time for them to find the routine that worked for them. She put in the time and effort to make it work.

Thor on the other hand just jumps in and starts trying to imitate this routine without building up the relationship first. This means that he isn’t doing everything that Bruce Banner needs, but it also means that the trust isn’t there. They don’t have that solid foundational relationship to build from, so it doesn’t work, and Banner eventually just pushes him away and tells him to stop. Does that sound familiar too?

How many times to do we just want to jump to the end results of being able to calm down our child without first building that foundation of trust and discovering what they as an individual need? I still do it after years and years of practice; it is an easy trap to fall into!

Our Stress = Their Stress
Like I said, Black Widow uses calm and slow movements and speech in order to help Hulk calm down enough to turn back into Banner. Thor on the other hand keeps touching him, speaking quickly, and talking A LOT. It is obvious from his speech and his mannerisms that he is dealing with a lot of stress. The stress is the only thing that is being communicated, and that does not help calm anyone down.

I think about how often my stress levels are high enough to leak into everything that I do. Then when trying to help a child with Autism either avoid a meltdown or come down from one, I only end up making it worse. I recently read “Fifteen Things They Forgot To Tell You About Autism” and in it the author talks about how when she is really worried about her children acting “normal” out in public, they usually have a meltdown; but when she just accepts that whatever happens will happen and she can help them if they do have struggles, then they usually do much better. I have also found this to be true with my son. Children with Autism are so sensitive to outside stimulus, that when we are anxious, that only makes a meltdown more likely.

Why We Are Helping Them
Another big thing that I noticed was the difference in motivations between Black Widow and Thor. Black Widow wants to help Banner become himself again because she loves him and cares about him. Thor wants Banner to stay himself because Thor needs Banner to help him.

A lot of times I don’t want my son to melt because I am tired, or we are in public and I don’t want to be embarrassed or judged, or because I have something else I want to do. He can tell when I want to help him because I just want him to be safe and happy, and when I am trying to help him for selfish reasons. And that makes all the difference.

Meltdowns are not fun for anyone (parent or child), but if we just employ these 3 subtle changes to the way we approach meltdowns, we will see a deeper relationship with our child and less meltdowns.