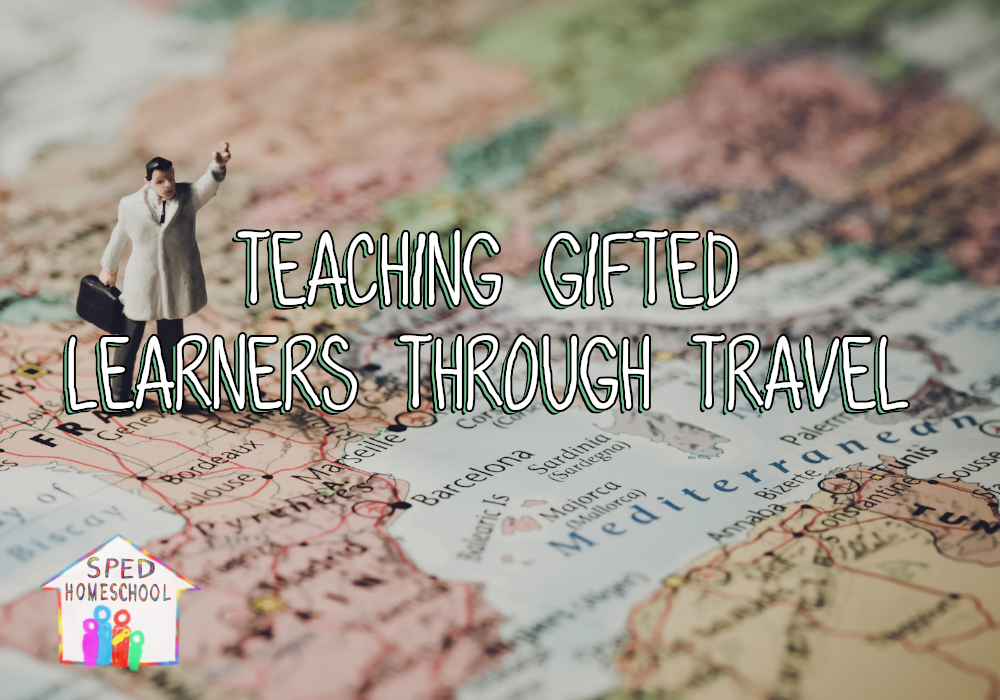 A lot of families like to add learning activities to their vacations, which is something I recommend. We have not taken many vacations, so I found that difficult to do. However, my son has had many opportunities to travel, and this has been a huge part of his learning.

Learning Through Travel When Possible
When he was in elementary school, I was a curriculum representative and speaker at homeschool conventions across the country. Each year, from April to August, we traveled almost every weekend. One weekend we might be in Kansas City, while the next we were in North Carolina.

While this was a crazy schedule to keep and we put a lot of miles on our SUV, we loved it. One of the huge benefits of all of that travel was the learning that went along with it.

Around the time he entered junior high, we had to step back from our convention schedule for medical reasons. He suddenly started manifesting symptoms from an autoimmune disorder that we were unaware he suffered from. Because these disorders are notoriously difficult to diagnose and treat, it wasn’t a quick process. Needless to say, his medical needs took precedence.

Within a few years, however, his health started to improve and he learned to take the necessary steps to manage his health. When he was well again, one of the things that brought him the most joy and fulfillment was being able to travel in order to serve.

For the past six years, he has been given the opportunity to travel both around the country and around the world to serve in many capacities. As I write this post, he is in Mexico serving with a missionary family – and loving every minute of it!

Learning and Serving Through Travel
The travel itself has been both an adventure and a blessing, but what has really surprised me is how much he learns with each and every trip.

Through his participation with Generation Joshua, my son travels several times per year to volunteer for political campaigns in various states. This is something he loves to do and finds a lot of value in. This experience gives him an interesting view of how people in different parts of the country think and express themselves. Talking to people in Kentucky about a political candidate is much different than doing so in Wisconsin.This helps him to understand people on many different levels. For gifted and asynchronous learners, this is a huge benefit!

Traveling to serve also helps him effectively learn life and leadership skills. He is responsible not only to motivate himself and keep himself on schedule but to keep his team motivated and on track.

It’s one thing to read about skills in a book; it’s another to actually practice them in real life. Doing so through his work with Generation Joshua allows him room to learn these skills with a bit of a safety net. He has room to succeed and fail, room to learn, but someone to catch and guide him if he gets too far off track.

These are things that I, as his mom, simply can’t teach him in the way that they can. Somehow, being in a radically different environment helps cement those skills.

Opening Worlds Through International Learning and Travel
Something that becomes evident very early on with our gifted learners is that they want to take on the world. They each do it in their own way, but the desire is often there.

I have found that my son often learns best when I allow him to literally “take on the world!”

He started doing this at a fairly young age by raising money to send his friends on mission trips. For medical reasons, he couldn’t travel internationally until he was 16 or 17, but he could send his friends. By doing so, he learned a lot about what it really means to serve.

Once he had the medical release, he discovered that the world really is his classroom. His first international trip was to western Turkey, on a study tour with his university. He had the amazing opportunity to take his Book of Acts class in Asia Minor!

Since then, my son has traveled each year to both Mexico and the Philippines for missions work. Each time, he has learned so much that I never would have thought to teach him! Of course, he learns about foods that he probably wouldn’t otherwise try (like durian and balut), but he also learns about the amazing nuances of other cultures. He gets to witness, firsthand, why other cultures think the way they do, where their traditions and religious beliefs stem from. In many ways, he also comes to understand their political and philosophical beliefs as well as their sense of patriotism.

Living in a society as polarized as ours, this is essential to understand.

On a more practical note, he learns life skills in ways that I don’t have the ability to teach. He can navigate airports in Asia, shop at a corner market in Mexico, and find his way around the Grand Bazaar in Istanbul.

But he is also learning what it takes to live on his own and schedule the little details of his day in a way that gives him freedom, but also safety. He is currently learning the ropes of having his own apartment while living just upstairs from the oldest son of the family he’s serving with. He is figuring out independence while having a safety net that isn’t Mom and Dad.

Is Learning Through Travel Right for Your Child?
Learning through travel isn’t the right choice for every teen or college student, but for many gifted learners, it is an incredible tool. These kids think and process in such different ways that being outside their “normal” can be the most effective way of learning.

It might just be worth looking into for your student! If you have any questions, I’d be glad to help – just comment below!