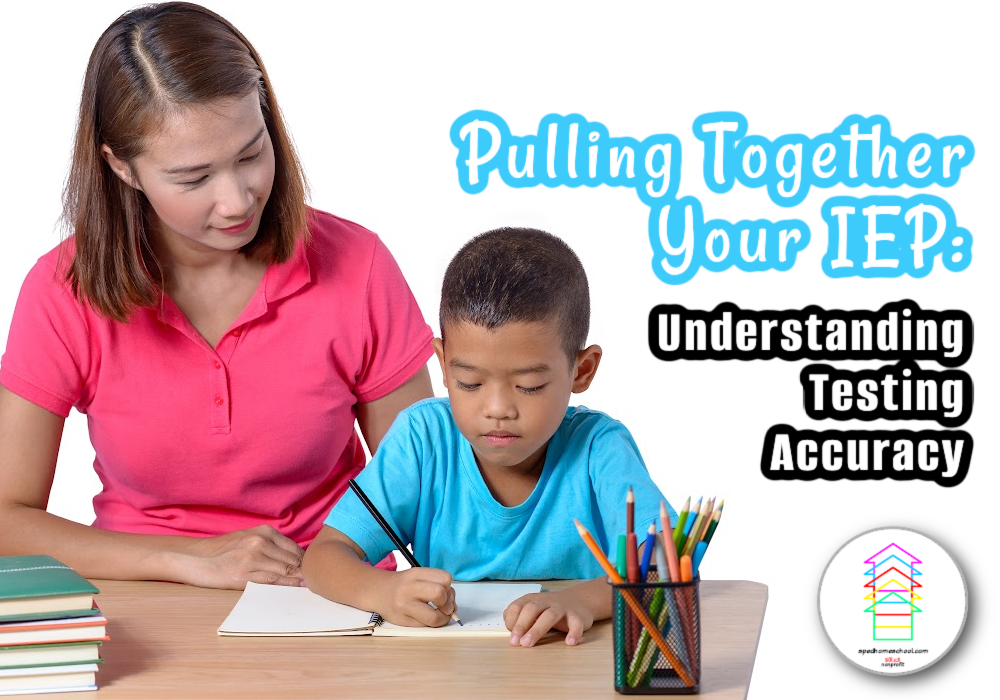 There are many factors to consider when it comes to testing. There are different types of testing, different purposes behind these tests, and how the information can be used. These tests can be useful in different ways to determine your student’s strengths and weaknesses when writing an IEP.

Many states require parents to show progress through nationally normed tests, such as IOWA, CAT, or MAP testing. While there are many others, the purpose of these tests is to show how your student is progressing compared to other children the same age or grade. They are also generally based on a set of standards, such as Common Core Standards. It is important to keep in mind that these tests may not show everything your child has learned that school year, especially if your curriculum was not aligned to the same standards as the test they are taking.

In order to receive a diagnosis for a learning disability, a parent may have a psych-educational assessment completed. This assessment would include Cognitive Testing, along with Achievement Testing. Sometimes Executive Functioning and Behavioral Assessments are also included, depending on the concerns of the parents.

Common Cognitive tests include the WISC-V, KABC II, or WJ IV – COG. These tests consider how a learner takes in information and processes it. Here are the main areas these tests may consider:

Comprehensive Knowledge (Crystallized Intelligence) – Gc- has to do with an individual’s breadth and depth of knowledge, including verbal communication, general information, and reasoning with previously learned procedures. It may be helpful to think of Gc as the “stuff” or facts stored in long-term memory and the ability to reason with it. Gc develops largely as a function of both formal and informal educational opportunities and experiences and is highly dependent on exposure to mainstream U.S. culture. Classroom skills associated with Motherlized knowledge include use of vocabulary, understanding written and oral language, acquiring knowledge in content areas, and using prior knowledge to understand new concepts.

Long-Term Memory/Retrieval – Glr – has to do withthe ability to store information in and fluently retrieve new or previously acquired information (concepts, ideas, names, etc.) from long-term memory. Glr, or Rapid Symbolic Naming, involves the rapid naming of digits and letters, and requires students to fluently recall and name letters or digits from long term or permanent memory. Classroom skills associated with Glr include learning and recalling information on tests, retrieving specific words when asked a question, and memorizing and recalling facts.

Visual Processing – Gv – has to do with the ability to perceive, analyze, store, retrieve, manipulate, transform, and think with visual patterns and stimuli. Classroom skills associated with visual processing include reading maps, graphs, and charts, noting visual detail, using patterns in geometry, geography and art designing, and assembling puzzles.

Auditory Processing – Ga – has to do with the ability to perceive, analyze, and synthesize patterns among sounds and to discriminate subtle nuances in patterns of sound and speech. Ga or Phonological Awareness, measures a student’s awareness of and access to the sound structure of their oral language, specifically English. Classroom skills associated with auditory processing include phonetic skills, such as the ability to make sound-symbol associations related to reading. Research has also shown that math facts are tied to auditory processing as well.

Fluid Reasoning – Gf – has to do with the ability to reason, form concepts, and problem solve when faced with a relatively novel task or unfamiliar situation. Classroom skills associated with fluid reasoning include perceiving relationships among patterns, drawing inferences, solving abstract problems, thinking conceptually, comprehending implications, generalizing, and reorganizing or transforming information.

Processing Speed – Gs – has to do with the ability to process visual information quickly and the rate at which a student makes correct decisions quickly and learns new skills. Classroom skills associated with processing speed include the ease and speed at which a student learns new information and fluently performs routine academic tasks, which can affect reading, writing, and math skills.

Short Term Memory (Working Memory– Gsm/Gswm – has to do with the ability to apprehend and hold information in immediate awareness and then use it within a few seconds. Gsm, sometimes called Phonological Memory, refers to coding information phonologically for temporary storage in short-term memory. Gsm is a limited time-capacity system, as most individuals can only retain seven “chunks” of information (plus or minus 2 “chunks”) in the system at one time. Classroom skills associated with short-term memory include reading comprehension, decoding skills, spelling skills, and remembering oral directions.

Some things to consider when looking at the scores on Cognitive Tests:

Achievement Testing might be completed by itself by a dyslexia therapist or tutor, or as part of a larger assessment.  Achievement Tests create a picture of about where your child is performing compared to other children your child’s same age or grade (depending on how it is scored). Common Achievement Tests include the WIAT 4, KTEA 3, and WJ IV – ACH.

Math should include Math Calculation and Math Problem Solving. Math Calculation is generally paper and pencil (so take into consideration any writing challenges or visual challenges your child may have), and Math Problem Solving is often verbal questions (so take into consideration any challenges your child has with verbal directions). Sometimes Math Fact Fluency is also completed, to help determine if your child is able to fluently complete math facts, or if that may be a factor either math calculation or problem solving.

Reading might include areas such as comprehension, fluency, word reading, and phonemic awareness.  The exact tests given will be determined by the needs and concerns regarding your child. Listening comprehension may also be given for younger readers, or to determine the ability of your child to understand stories without having to actually read them.

While Executive Functioning and Behavior can overlap, behavior can be assessed when there might be concerns over anxiety, depression, mood, autism, attention and hyperactivity, and more. The concern is whether the behavior is limiting learning, or being caused because the child is already struggling with a learning challenge.

Reading Scores on a Standardized Test

Most Cognitive and Achievement tests are scored by standardized scores. Generally, this will mean scores above 115 are Above Average or higher, 85-115 are within normal range (90-110 are considered average), and below 85 is considered below average, and a concern. Sometimes a scale of 0-20 is used instead. In this case, 6 and below would be Below Average and a concern, 7-13 would be within normal limits (8-12 would be average), and 14 and above would be considered Above Average or higher.

Amy Vickrey is the Training Manager at SPED Homeschool. To learn more about her, her background, homeschooling journey, and testing/tutoring services, visit her team member page. 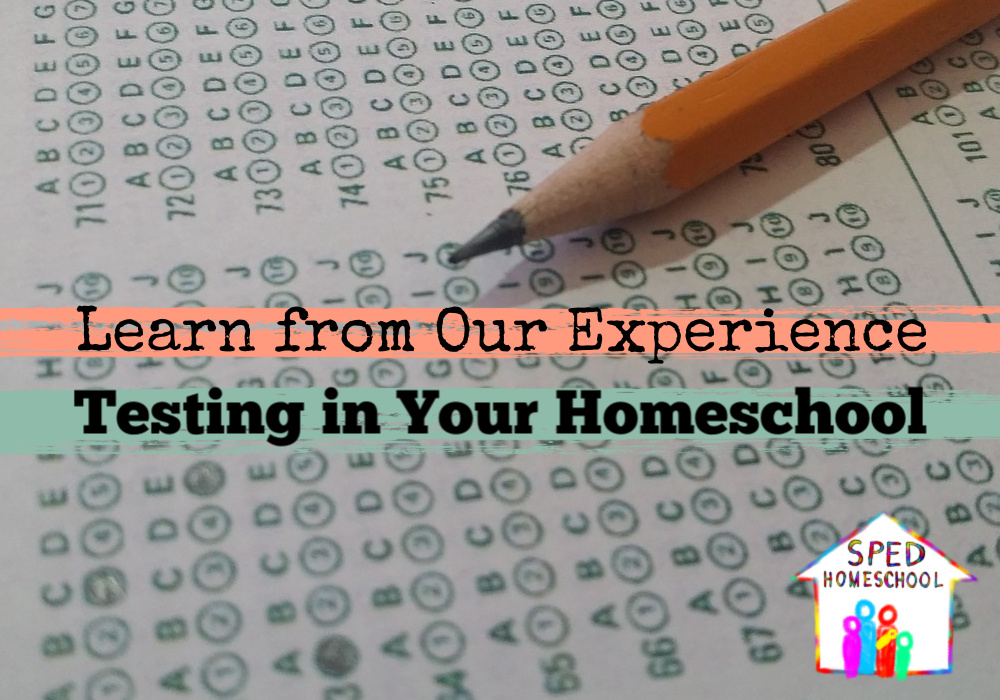 Each state requires different things from homeschoolers, and sometimes that means incorporating testing in your homeschool. Other times, parents prefer testing in order to get an idea of what to focus on next. Here are our team members’ experiences with testing in their families.

For our family we homeschooled most of our years in MN, and there was a yearly testing requirement we had to fulfill per the state homeschool law.  I was rarely surprised by the test results, and I never spent time teaching toward the test because it never carried much weight in my mind as to what my children were accomplishing in accordance with the goals I had set for each of them.

One surprise I did experience though as a result of this yearly requirement was the fact that my middle son was struggling with Dyslexia.  We switched our test and tester that year to a more comprehensive battery of tests which ended up fatiguing my son. The woman who was testing him actually caught the fact his answers were getting worse and worse as the test progressed and noted the incident to me as we finished up reviewing his results.  Her observation was one the actual test would have never caught because the test only showed that he excelled in the subjects he was tested on earlier in the testing cycle and fell short in the subjects he tested on later on during his testing.

“Just like your homeschool, make your testing fit your child.“

I have been using testing in my homeschool to track progress.  While not required by the state, circumstances have necessitated that I track his progress through this year in a more formal manner.  I especially like the Lexile score I receive from the test. This has helped be more aware of helping my son transition from “learning to read” to “reading to learn.”  I was also pleasantly surprised at the amount of math skills he had picked up informally from watching education videos and playing educational apps!

For accommodations, we take lots of breaks when we take a test.  I help navigate the test on the computer so that my son doesn’t “accidentally” hit the wrong button due to his fine motor limitations.  I also use reminders to stay on task and to read thoroughly through the questions before answering. I like that the test I have been using grows with him, and shows growth over time.  This has been helpful in tracking his progress.

Here is the link for the test I use.  Plus, SPED Homeschool community members receive $5 off with code SPED.

As a formal public school teacher testing does not conjure up good memories. I have to push that to the back of my mind and take on the hat of homeschool mom. I ask myself what do I want to get out of the testing? I informally have tested my daughters in many online assessments. I also use the testing that is done with my daughter through therapy as wonderful information. I am hardly shocked at the results as I see them learning everyday and know where their strengths and weaknesses lay. There are so many choices timed, untimed, paper test, and online tests. Call and talk to the companies and many like IOWA and CAT tests send out samples for free or inexpensive fees. Just like your homeschool, make your testing fit your child.

At different times, we’ve been required to include testing in our homeschool. While I personally don’t see testing as the most valid way to show what a child knows, I also see the value in having my children learn to take these tests as a life skill. Test-taking is a skill in and of itself. Because I know that my kids will inevitably have to take tests throughout their lives, we focus primarily on how to take a test and what they need to be successful in their test-taking skills, rather than focusing on the academic data.

For many years when my kids were younger, we worked through different anxieties over timed activities. I timed everything as a way to help them overcome their panic. We worked on teaching them to pace themselves and to not get stuck on a single problem. My kids still have individual areas of test-taking that we continue to work through.

Whether you are testing in your homeschool because of state requirements or your own preferences, finding the best fit for your child and having the right perspective can provide a more positive experience and a more productive result.