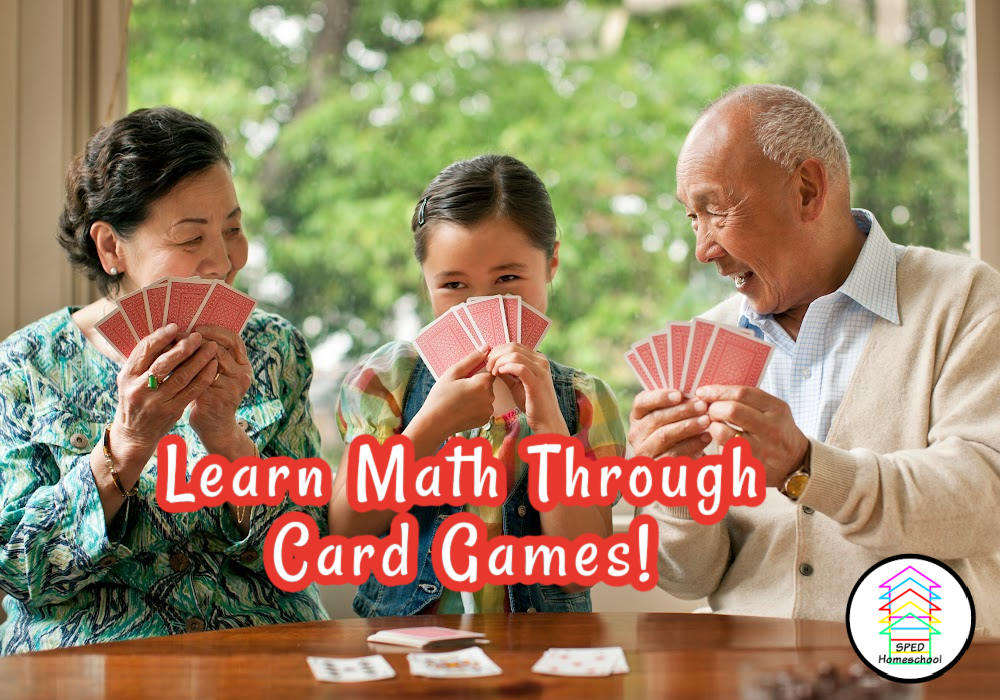 Ahhhh. The holidays are almost here. This means you get to see your family, enjoy making meals and treats with your children, and you get time off from teaching. Then, you get to worry that they will not remember the math facts that you just taught them!

There is a wonderful solution right at your fingertips. Play math card games! These are games that the cousins or grandparents can play with your children. They take little prep time and can be taken wherever your family celebrates time together. I can guarantee that they will have loads of fun and never mind that they are keeping their facts fresh.

What kind of games am I talking about? Let me share three games with you; an easy one for the littles, a medium to hard one for those working on multiplication, and a fun game with fractions that everyone will enjoy.

Go to the Dump

The first game is called Go to the Dump. It is a Go Fish sort of game. Do you remember that game? It uses a deck of cards with numbers 1 through 9. We have a deck of cards for you here, but you certainly could just use a deck of regular playing cards without the 10s and face cards. Remind little ones that the aces are 1. Deal five cards to everyone and put the rest of the cards in the middle of the playing area face down. Then rather than looking for two matching numbers to make a pair, like the regular Go Fish game, look for two numbers that add up to 10 and are a match. 1 and 9,  2 and 8, 3 and 7, 4 and 6, and 5 and 5 are all pairs.

Have the players check their hands for pairs. If matches are found, lay them down on the table side by side. This makes it easy to check players’ work and makes shuffling super easy after the game. Then one player will ask the person on their left for a card to match one in their hand. If they have the card, they give it to the first player and the first player gets to ask for another card. If, or when,  the requested card is not available, the second player says,“Go to the dump” and the first player takes a card from the stock. Their turn is now over, even if they received a match.

The second player now asks the person on their left for a card. Play continues all around the circle. If someone matches all their cards and has no more in hand, they take five more cards from the stock. Play continues until all the cards have been matched.

This is a game that younger children like a lot. It’s a game that we parents can play with just a few brain cells involved. And the kids are working on the important facts of 10, while having fun!

Start by shuffling the cards together and lay them face up in fans of three. The last fan will have only one card. The point of the game is to collect the four sets in order, taking the cards from the fans. But only the top card of a fan may be collected.

Columns are started with the lowest number of a set (1, 2, 4, and 8 in my example) as they become available. The top card of a fan, the 32-card, for example, may be moved to another fan if it immediately precedes (in a multiples set) the card it is being moved to, the 36-card. Because 32 and 36 are consecutive multiples of 4, the 32-card can be moved to free up the card underneath. A group of cards may be moved, provided they are all consecutive multiples of a set used. In the game shown above, the 28 and 24 may be moved to the 32, freeing up the 6.

Also, the last card of a multiple’s column may also be moved to another column. This gives flexibility to help win the game. If no cards can be played, pick up the fanned cards, shuffle, and lay the cards again in fans of three.

This is a great game to help your child work on their multiples. Because this is a solitaire game, you don’t have to be involved. Or, if you want to play the game together, become a team and work to beat the cards with as few reshuffles as possible. Or maybe work to be the fastest team in the family!

Finally, let’s take a peek at a fraction game: Fraction War. Did you play the game of war for as a child? It feels like I played this game for days on end!

Keep the cards face down and divide them evenly between the two players. The goal is to capture all the cards from your friend. Each player takes the top card from their stack and lays it face up in the middle of the table. The player whose card is greater takes both cards. Here is a chart that can be used to help the players determine the larger fraction.

If the players turn over the same cards, it’s a war! When this happens, which will be relatively frequently, both players place a card from their stack face down on top of their first card, then another card face up. The player who has the highest card now takes all six cards. Again, the goal is to get all the cards from your friend. Now, go!

These game ideas are brought to you by RightStart Math, where we have so many more games for you and yours. We hope you have a wonderful holiday season filled with happiness, joy, and math games!

Kathleen Cotter Clayton is the daughter of Dr. Joan A. Cotter, author and creator of the RightStart™ Mathematics program. She was one of the first children to grow up under the Activities for Learning principles. Kathleen has a degree in Home Economics from the University of Minnesota and has two Masters Degrees from the University of Mary in Bismarck, North Dakota. Kathleen and her husband Steve have six adult children and six wonderful grandchildren.

Kathleen is currently responsible for program development support, marketing, sales, and general management. She travels all across the US and Canada, sharing the RightStart mission of helping children understand, apply, and enjoy mathematics. She is currently supporting/teaching an online class with a group of middle-school students and is developing the new RightStart Tutoring series. In her spare time, Kathleen designs and sews quilts and is re-learning how to unicycle.