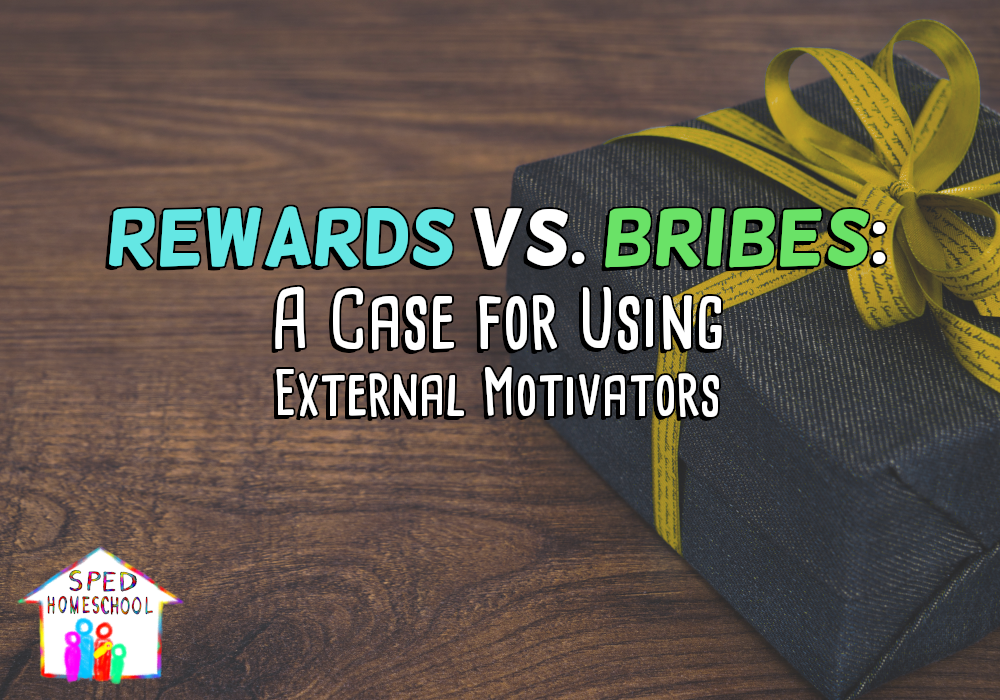 Have you tried absolutely everything to motivate your child to get their school work done? Are you using incentives and worried about bribing? Are you unsure if rewards are a great idea in the first place?

I get where you’re coming from. Read on and learn from my own experiences with using external motivators and be prepared for an unlikely surprise!

You read that right. External motivators (aka incentives or rewards) are not bribes. I used to be under the same impression! Constantly, I found myself confused by conflicting advice. There are parenting books saying, “Don’t bribe,” but then reward charts are used in ABA therapy. What’s a parent actually to do!?

I finally learned the difference when I confessed to our ABA provider that I was bribing my son for good behavior that day.

Then she set me free…

There’s a small, but a key difference
I think the best way to explain it is through example, but basically, it matters when and how you’re employing the external motivator.

Let’s say your child loves playing Minecraft, but hates doing math. I’m going to use this hypothetical to demonstrate both a bribe and an incentive.

Bribe: Your child is crying, arguing about math, and basically falling apart. You say, “If you finish 4 more questions, you can play Minecraft!”

Incentive: You start an ongoing policy that no Minecraft will be played before math is complete, or perhaps that after every page of math completed, they can have a 15 minute Minecraft break.

See how the bribe happens after the undesirable behavior? Your child can employ the behavior to get the reward. In the case of the incentive, there is a hard and fast set of rules and expectations. They are established before any “negative” behaviors begin. The child lives up to their end of things before getting the reward.

So, in adult terms, it’s the same as working hard for a raise or promotion as opposed to getting a raise because you are threatening to move jobs. In that last case, you have the power and the boss is bribing you to stay.

Now that we’re clear on that…
I think it’s important to discuss the pros, cons, and other things to consider when using external motivators in your homeschool. Nothing in life is super easy, right? Here is what I have learned putting these ideas into practice…

Be aware that constantly using food or sugary treats to motivate can be a slippery slope into bad eating habits and eating issues down the road. Our brains already light up on MRIs with sugar consumption. Now imagine when it’s consistently given as a reward for doing something undesirable? That same principle applies to electronics.

Intrinsic motivation
Make sure you’re not building a reward monster who will only do things for clear, external rewards. Build in ways to practice being intrinsically motivated and flexible. While we generally all work for a paycheck (external motivator), we need to do other things like eating healthily or cleaning the house because we are intrinsically motivated.

Our goal isn’t leaning so heavily on rewards that they grow to expect them for any and every little thing. We try to reserve them for the “big things.” However, if you need to start with the small things too, just keep re-evaluating how and when to phase them out.

Stick to your guns
If you told your child the rules for the incentive… those are the rules. You can adjust them as needed, but do so carefully. If they are having a meltdown moment over the undesirable activity, don’t adjust it right then. Adjust your expectations the next day or after taking a break to soothe.

Don’t cave into giving them their Minecraft time (or whatever the reward) for less than the agreed amount of work because they are having a hard moment. That’s how you slip back into bribing. Just adjust the agreement in the right timing if truly necessary. The magic of incentives lies in the follow through!