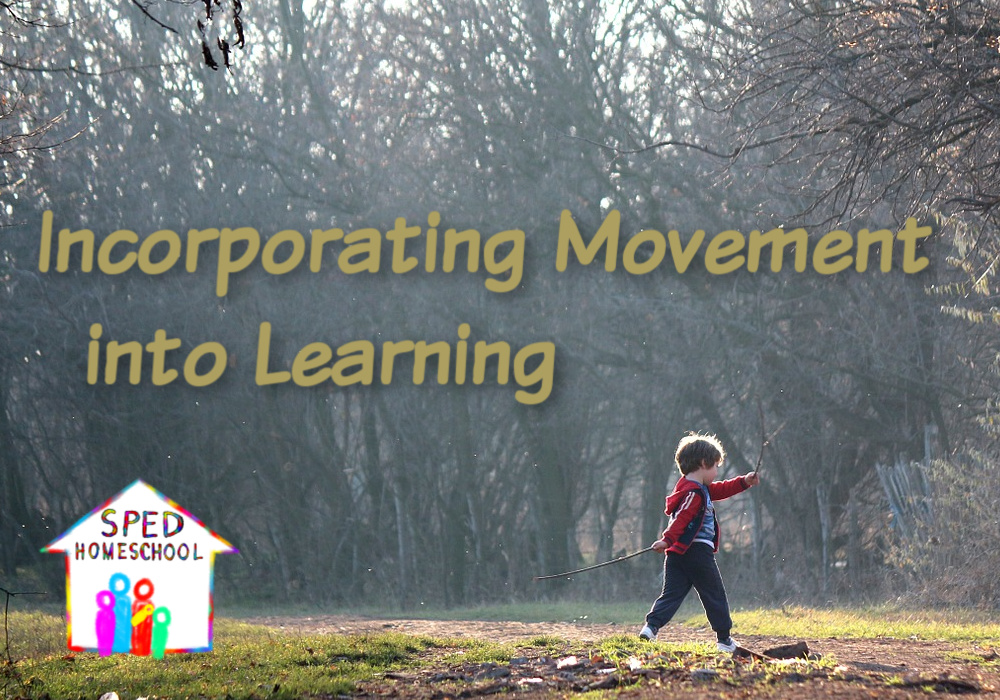 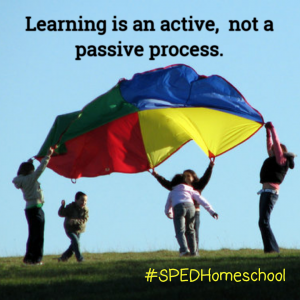 We have all chosen to homeschool because we felt like it was the best option for our family, especially our child with special needs. While there may be many reasons, I am sure that a big one for most of us is wanting our children to be able to learn in the way that is best for them. And for many of our children, the best way is by incorporating movement into learning.

I have spoken about the DIR/Floortime method before (developmental levels, individual preferences and needs, and relationship based learning), but I wanted to stress the “I” and talk about individual preferences and needs and how we can use that to help incorporate movement and interests into learning. Everyone learns differently, but one thing is the same: we learn best when we involve our whole body and multiple senses.

Incorporating Movement into Learning as Motivation

When I was working at a private school that used the DIR Method to teach children on the Autism Spectrum, we used movement as much as possible in the classroom. All of our students had different sensory needs, but two examples come to mind when I think about movement based learning. (Names have been changed).

Cody loved to ride on a scooter. He had several at home and would bring one to school almost every day to play with when we went outside or to the gym. Since he loved to ride on it so much, we would use that passion as motivation when we taught him. He was working on simple addition, so when he would work on a problem and get the correct answer, he could ride his scooter around the gym that many times. Then we would move on to the next question and repeat. He stayed engaged with learning for much longer than just sitting, doing multiple problems at once this way. He also learned to concentrate on the problem because he knew he would get to ride his scooter as soon as he figured it out.

Nick was another boy who loved movement, but he preferred to swing. We had a sensory swing in our classroom, often we would work  on lessons while he was in the swing. One time I remember we had to do some testing with him, and that was becoming a struggle. When we tried the testing again, this time with him in the sensory swing, we were able to finish much faster than we anticipated.

With my own son, I have found that the more ways we can use his body in learning, the happier he is. We have been working on the concepts of fractions lately, and using a play dough pizza set has really helped him a lot. Being able to touch and squish and get that sensory input while learning helped him to understand a concept much faster than he would have without that body involvement.

Incorporating Movement into Learning with Breaks

Each child has a different sensory profile. Your child may love to spin in circles, while other children can’t stand to move that quickly. Some children love to watch lights move around, while others will close their eyes to block it out. Your child will seek certain sensory inputs while avoiding others. Knowing what these needs are for your child is crucial to their success.

Along with the types of sensory they like or dislike, you have also probably noticed that your children have certain times of day or certain activities that require more sensory attention. The flexibility of homeschooling means that you can schedule learning during their sensory “down times” or times where they are most regulated.

If running outside helps to calm them down, then do school right after outside time. If it tends to wind them up, then you should do school before physical activity. Make sure that they have the movement breaks they need at the times they need them. This will make your learning times go much smoother.

Incorporating Movement into Learning with Therapy

Another great way to incorporate movement into learning is to use it with therapy. We obviously see movement worked into gross motor and occupational therapies, but you can also incorporate it into other areas as well.

When I was working with a nonverbal 10 year old girl, we were trying to teach her to use PECS and she was struggling to pick up the concept. She liked to swing outside, so we spent a lot of time outside with “yes” pictures and “no” pictures. I would push her on the swing for a while, and then I would stop her. I would ask, “Do you want to swing?” and then hold up the two response pictures. She learned very quickly to pick the “yes” picture! Using her body and her favorite activity helped that concept to snap into place, and then we were able to use it other places as well.

There was another boy who would have a full meltdown if someone didn’t finish a sentence or if he didn’t hear them finish it. Repeating the sentence or finishing it later wouldn’t stop the meltdown from happening. We used a calming swing that he really liked and once he was calm, we would play the “what if” game. I would say the first part of a sentence, and then ask him to guess what I was going to say. He would make a guess, and I would say, “That would work, what if I was going to say something else? What else could finish that sentence?” After a few weeks of playing this game when there was an incident, he learned to play it in the moment and guess what other people were going to say and then ask them what they were really talking about.

Each family is different, so each homeschool is different, but you can see how paying attention to what your child’s body needs is an important part of their learning and regulation. What are some of the ways that you already incorporate movement into learning in your homeschool? What do you think would be a great addition?