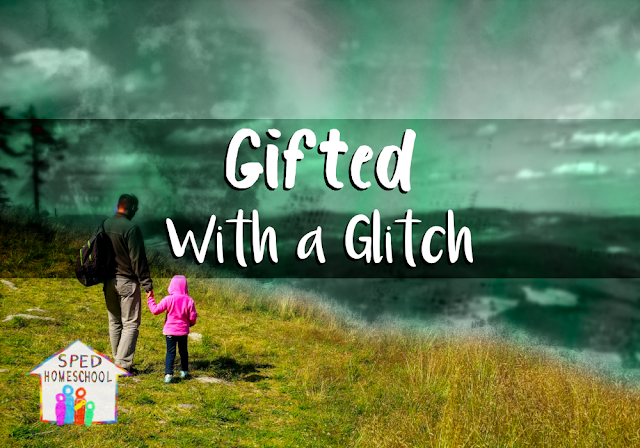 All of our children have unique gifts that God has imparted to them. However, for the purposes of our discussion today, let’s look at giftedness from the purely academic viewpoint. One of the most puzzling scenarios we see in our children, is the child who is academically gifted, but performing so far below that standard. Often, this child can be seen as having a “character” problem. We might conclude that this child is “lazy, sloppy or unmotivated.” We use many different strategies to help that child perform better without success.

Today I want you to consider another possibility. This could be a child who is gifted but still has a learning glitch. Commonly, the child who is “gifted with a glitch” is the most misunderstood of our children. Let’s see if we can unravel this mystery child a bit.

Characteristics of Academic Giftedness
The general consensus is that an average IQ is 90-109. One can accomplish much with an average IQ. In general schooling settings, a child is considered for entry into “gifted” classes if his IQ measures at 120 or above. However, we home educators often do not have to have our child tested in order to know that he is academically gifted. We can see it in so many ways.

Dr. Linda Silverman, author of Upside Down Brilliance, and founder of the Gifted Development Center in Colorado agrees with this (www.gifteddevelopment.com). She states that parents are excellent identifiers of giftedness in their children. She has found that 85% of the children whose parents say they fit three fourths of the following characteristics score at least 120 (superior range) in an IQ test.

You may have recognized these characteristics in your own child, but are puzzled because his performance does not match his IQ. Is this a manifestation of a character issue or a learning glitch?

Twice Exceptional
After I had finished homeschooling my son, I went back to teaching. I taught children who were identified as “Twice Exceptional”. I thought of them as “gifted with a glitch”, because they were identified as Gifted, which was one exception, while experiencing another exception: below average performance in schoolwork as the result of a learning disability.

I learned so much working with these wonderful teenagers. I helped them overcome their learning glitch, so that they were free to do the things that God called them to do.

Most Common Glitch
The most common learning glitch that these children displayed was Dysgraphia. These teenagers had great ability to tell a story orally, but when they put the “offending utensil” in their hand, their mind shut down. I had them in my Language Arts class because they were turning in so little written work. (Math teachers also reported that they refused to “show their work” or, they made, “careless” math errors because they didn’t line up their numbers correctly, which is another subtle sign of this visual/spatial disorder.)

Because spelling is usually taught by writing the words multiple times, or by filling in worksheets (with the offending utensil…the pencil), these young people had not memorized many common spelling words, such as “was, sure or what. They continued to misspell the days of the week and months of the year, even after we had studied them many times. This made their writing appear very primitive.

Diagnosing the Spelling Gap
When it came to spelling errors, my first goal was to determine whether this child really had not memorized the necessary words,or it could be that the child actually knew how to spell the words correctly, but misspelled them because of the writing glitch.

When a child misspelled a common word, I asked him to spell it orally while I wrote it down for him to see. If he spelled it correctly orally, then I determined that the writing glitch was the biggest cause of this child’s spelling errors in writing.

Filling in the Spelling Gap
Then, I employed an exercise developed by Dr. Getman, forty years ago called “crossing the midline.” If the child spelled the word incorrectly even when I wrote it in front of him, then I realized that the method, which had thus far been used to teach this child spelling, was not the correct method to use to instruct him.

Thus, I chose two methods that by-passed this problem:

Of the two programs, the Right Brain Spelling, utilizing the child’s strong Photographic Memory was the strongest program.

Working Towards the End Goal
To teach paragraph writing skills, I used a very basic step-by-step program I called Right Brain Writing, (I sometimes called this “Writing Without Curriculum”, because it is the parent/teacher working with the child, showing him how to think through all the steps of paragraphing). This method allowed the child to see the end from the beginning and follow an easy path to success. I developed this to be used even for the most basic non-writer. (To receive a free Daily Lesson Plan for the Struggling Writer and Speller, go to my website and download it).

After a child has become adept at creating paragraphs working from a blank piece of paper, using this webbing and transition word method, (usually about nine months), then he often is ready to go on to a more sophisticated writing method developed by the Institute for Excellence in Writing or other programs like that.

It is such a relief for a child to have his glitch identified and, based on that information, to utilize new methods of teaching him. Your child will be grateful.