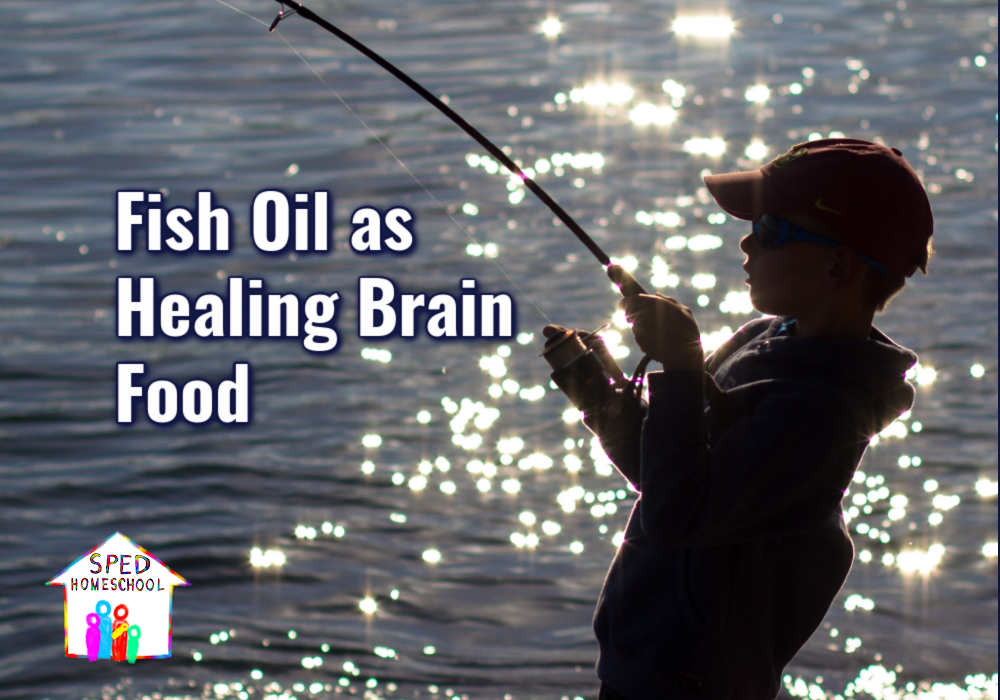 Sometimes a subject comes up that is so wide-reaching in its impact, that it cannot be ignored. As a special educator for over thirty years, and a nutritionist, I am always on the lookout for ways to relieve suffering in kids who are struggling with learning or behavior. It has come to the point that evidence of the impact of fish oil on the brain and nervous system of these struggling children is so large that I think it deserves its own article.

The incidence of children diagnosed with food allergies (notice all of the gluten-free and dairy-free items in grocery stores as of late?), asthma, autism, Asperger’s, sensory processing dysfunction, ADD, ADHD, dyslexia, and dysgraphia has increased greatly in the past five years. There is a disproportionate number of boys in this increase. Why is this occurring? UCLA School of Medicine has found that boys have a three times higher need for DHA, a type of Omega-3 fat from fish oil, than girls. Let’s explore this more…

The incidence of depression has skyrocketed in children and adults since World War II. The Centers for Disease Control and Prevention reported that 11 percent of Americans over the age of 12 take anti-depressants. What is going on? Researchers report that blood levels of inflammatory markers such as C-reactive protein are frequently elevated in those diagnosed with depression. Could inflammatory changes in the brain be one of the main drivers behind our epidemic of depression? This may also explain why anti-depressant medications often do not work for people with depression. Emory University in Atlanta confirmed the depression/inflammation connection. Fortunately, there are natural ways to reduce inflammation. The most effective way includes a diet high in Omega-3 fatty acids, specifically DHA in fish oil. Dr. Michael Norden, a practicing psychiatrist in New York, uses essential fatty acids, and particularly fish oils, for his patients who are suffering from depression. Using fish oil in addition to medication, and sometimes without medication, Dr. Norden reports impressive relief from depression among his patients. Likewise, Dr. Andrew Stall, a physician from Harvard has found that the DHA in fish oil has proven to be extremely helpful in patients suffering from postpartum depression, bipolar disorder, ADD, and ADHD.

Many studies implicate inflammation of the white matter of the brain as a common thread in children diagnosed on the autism spectrum. However, one very unique aspect of fish oil is its effect on the gaze aversion that afflicts so many children with autism. The rods in the retina of the eye are very responsive to the supplementation of DHA. Dr. Mary Megson, a developmental pediatrician in Richmond, Virginia, has found that the reason that children with gaze aversion will seem to look away from a parent’s face is that, when looking directly at the face, all they see is a white block. Thus, they use their peripheral vision to at least get a glimpse of what they are looking at. With proper amounts of naturally occurring vitamins A and D in cod liver oil, this gaze aversion disappears or is greatly reduced. Dr. Megson states strongly that it is important that synthetic vitamin A in the form of retinyl palmitate not be used. Interestingly enough, I have found this also to be the case in the children in my consultation practice who come to me with gaze aversion. I have always found that with the proper amounts of DHA, for which I use a specific cod liver oil, the gaze aversion is eliminated or reduced by 85 percent. In fact, in the autism conferences at which I speak, I have “before and after” pictures of children with autism, showing the lack of gaze aversion after giving this vital nutrient. Besides affecting gaze aversion, parents report increased socialization, speech, bladder control, and sensory processing after even a short while of this supplementation. It has also helped many children struggling with ADHD, dyslexia, and bipolar disorder.

“It has also helped many children struggling with ADHD, dyslexia, and bipolar disorder.“

Probably the most dramatic healings reported after the introduction of high amounts of fish oil, have come from the healing of traumatic brain injuries that were not responding to other treatments. When Peter Ghassemi’s son was lying in a coma after a severe car accident, the doctors reported that while his son had survived the accident, he would likely be a vegetable for the rest of his life. This dad reached out to Dr. Michael Lewis, an Army colonel, for help. Dr. Lewis, the founder of the Brain Health Education and Research Institute, urged him to talk with his son’s doctors about using the same protocol that was used for a young man who had experienced this same type of traumatic brain injury. In that case, the young man, Randal McCloy, was the sole survivor of a mine disaster in West Virginia. McCloy, 26, had been trapped in the mine for 41 hours while the air around him was filled with noxious methane and carbon monoxide. His brain was riddled with damage from these potent toxins. McCloy’s doctors were looking for ways to stem the tide of inflammation and cell death occurring in his brain. His doctors embarked upon an unorthodox treatment regimen that included high doses of fish oil. Dr. Julian Bailes, one of McCloy’s doctors said “The concept was to attempt to rebuild his brain with what it was made from when he was an embryo in his mother’s womb. High doses of omega-3 fatty acids (fish oil), since they mirror what is already in the brain, would facilitate the brain’s own natural healing process. These fats are literally the bricks of the cell wall in the brain.” Dr. Bailes referred to the National Institutes of Health research that suggests that omega-3 fatty acids may inhibit cell death and could help in reconnecting damaged neurons. Worthy of note is that, in addition to massive cell death, the protective sheath around McCloy’s nerve cells had been stripped. The sheath, called myelin, allows brain cells to communicate with one another. Amazingly, three months after saturating his brain with high doses of fish oil, McCloy was walking and speaking. Armed with this success story, Peter Ghassemi urged his doctors to try this same, safe protocol with his son. The result? Three months after his accident, Bobby Ghassemi was well enough to attend his high school graduation. Bobby said, “The whole place was cheering for me…I took my graduation cap off and waved it around.” Peter Ghassemi said, “His brain was damaged, and this was food for the brain.” Dr. Lewis concluded, “The message that I’m trying to get across is, there’s more you can do. If you add the fish oil, we can then begin to let the brain heal itself a little more efficiently.”

In 2000, Dr. Jacqueline Stordy began to research the connection between DHA and dyslexia. She performed a double-blind, placebo-controlled study in which she studied children with ADD, dyslexia, and dyspraxia. She found that when a protocol amount of DHA (from fish oil), was given over three months, that statistically significant improvements were made in these children’s focusing ability, reading ability, and coordination and balance.

If you have a child who suffers from multiple cavities, no matter what you do, you will be interested in Dr. Weston Price’s research. A dentist, Dr. Price found that one way to prevent cavities from forming in the mouths of his young patients was to make sure that they had adequate levels of Vitamin D and the all-important Vitamin K2. Vitamin K2 helps to form the dentin, the porous tooth material underneath the enamel of the teeth. This vitamin can be found in fermented foods, butter, meat from grass-fed cows, hard cheeses, like Gouda, and a fermented food from soybeans called natto, or in supplements. As we know, good ol’ cod liver oil is a great source of both vitamins A and D.

What can moms do to help their child get these brain-healthy fats?

Begin to reduce the bad fats that block healing by including more good fats into a child’s daily diet with simple measures like adding some avocado in sandwiches, using real butter instead of margarine (especially if the butter is from grass-fed cows), and using real mayonnaise. Eat more whole grains and legumes versus white flour several days a week. Lastly, make raw vegetables and a salad an everyday part of your children’s diet. If you choose to give a supplement such as cod liver oil, fish oil, or Vitamins D3 or K2, it is best to check with the child’s doctor before beginning any supplement program. For a list of the amounts of fish oil, vitamin D3 and vitamin K2 that was used in these and other studies, just type “Fish Oil Article” in the subject line, and send to craft@ecentral.com

This article was originally published in The Struggling Homeschooler Magazine, February 2013.

The information in this article should not be construed as a diagnosis or medical advice. Please consult your physician for any medical condition and before adding supplements or changing a child’s diet.

Dianne Craft has a Master’s Degree in special education and is a Certified Natural Health Professional. She has a private consultation practice, Child Diagnostics, Inc., in Littleton, Colorado. Read more at her website www.diannecraft.org .