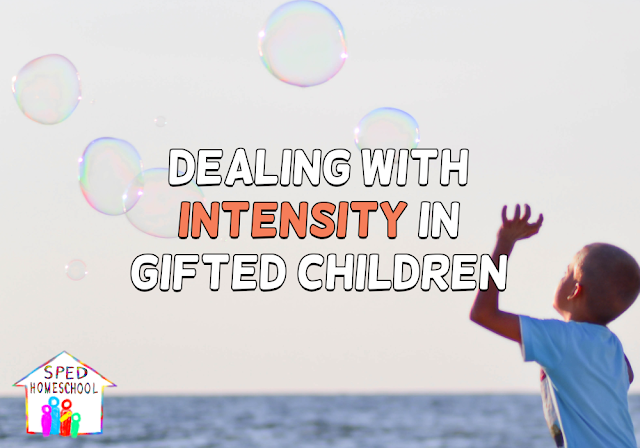 Intensity is a topic that parents of gifted children are likely very familiar with. Whether it rears its head in the form of emotional intensity or constant energy and questions, intensity is something that is a very common trait among gifted and twice-exceptional (2E) children.

A week or two ago, I saw a post in a Facebook group for parents who are homeschooling gifted and 2E children. The question presented was simple: “What signs pointed to your child being gifted, rather than advanced?”

There were quite a few different answers, but one kept popping up: intensity.

Over the past 20 years of parenting and homeschooling a gifted/2E student, I have definitely dealt with my share of intensity. Because he is my only child, at first I had no idea that his reactions and energy level were outside the norm. The only thing I couldn’t figure out was why he slept less than an hour or two a day!

Looking back though, I can see many signs of the intensity that is inherent in gifted children. Here are a few of them:

There are many other signs as well, but these were some of the most obvious. They were also some of the signs that were most often misunderstood by other adults!

Although intensity is common with gifted and 2E kids, it is often not easy to deal with. Not only is it difficult to keep up with as a parent, it’s also difficult (awkward, even) to try to explain to other adults.

To that end, I wanted to share some tactics that I have found helpful over the years.

Children love to learn. They’re inquisitive, curious, and think outside the box. Guiding them through the learning process is one of the joys of adult life – it lets us be kids again, in a way!

When you parent a child whose curiosity and drive does not seem to have an “off switch” though, this can become frustrating, even exhausting. Being stuck between wanting to encourage your child and wanting to preserve your sanity is not an ideal place to be!

How can a parent deal with the non-stop intensity?

1. Communicate with your child.
Something that we often forget, especially since our gifted kids learn at such an incredible rate, is that they are kids. They don’t always realize that we’re not omniscient (after all, we’re their parents). They also don’t realize that their “normal” is worlds away from ours!

2. Decide on “code words.”
As my son got older, he started to understand how differently our brains work. He started to see that at times, his brain works so quickly that I get a little left behind. I’m trying to “keep up,” but there are times I just need a break. We came up with a code word that would let him know this – it was one that we could use anywhere, even at co-op or other public places. It just let him know that I want to hear his thoughts and discuss them with him, I just need to do so in smaller “chunks.”

3. When you set time aside to focus on your child, focus as completely as possible.
This doesn’t have to be for long periods of time, but having that “focus time” can make a huge difference. When your child knows that you will focus with them (just not right now), learning self-control and prioritization skills becomes a lot easier.

4. Advocate for your child.
When other adults don’t understand your child’s intensity, be your child’s advocate. Be willing to gently educate them on where your child’s tendencies stem from and what they can do to help. Because gifted kids don’t seem to come with learning disabilities, it is often difficult for people to recognize their learning and perception differences.

As a homeschool parent, you also have to deal with your child’s academic intensity. Homeschooling comes with challenges of its own, but when you add in an almost insatiable thirst for learning and the ability to move through large amounts of material in short periods of time—well, the challenge becomes that much bigger.

When I first started homeschooling my gifted/2E child, I thought that the key to keeping up with him was planning out every detail. I soon found that didn’t work so well! Here are some things I learned to do instead.

1. Have a tentative plan in mind.
No matter how organized you are, your gifted child will always go beyond your planning abilities. Always. The curriculum you thought would last a year may barely last 3 months, and the unit you thought would be a fun, short “extra” may end up lasting for months. Have a basic plan in mind, but be willing to change when necessary.

2. Let your child lead the way.
Keep an open dialogue with your child about what works, what doesn’t, and what they would like more or less of. This will allow you to adjust your plans as you go rather than feeling like you have to reinvent the wheel every couple of months.

3. Have some resources in reserve.
When you see things that your child would love but don’t have a way to fit them in right now, quickly prep them and place them in reserve. Throughout your school year, you will have times when your child finishes something faster than expected or becomes fascinated with some new subject. When you have resources, units, and studies in reserve, you can easily pull them off the shelf and work them into your plan!

4. Don’t get tied into grade level.
Grade levels are not a bad thing, but they were not designed for gifted and 2E students. Many gifted students are asynchronous, meaning that they learn on several levels at once. In other words, your 10-year-old may be in third grade spelling, 7th grade science, and 9th grade literature. While this is difficult to plan and explain, it really is ok to implement.

Allowing our children to grow up and learn in an environment that is tailored to their needs can go a long way toward helping them gain the skills they will need later in life. You’re not alone in this journey!

For more support, make sure to join to SPED Homeschool Support Group.