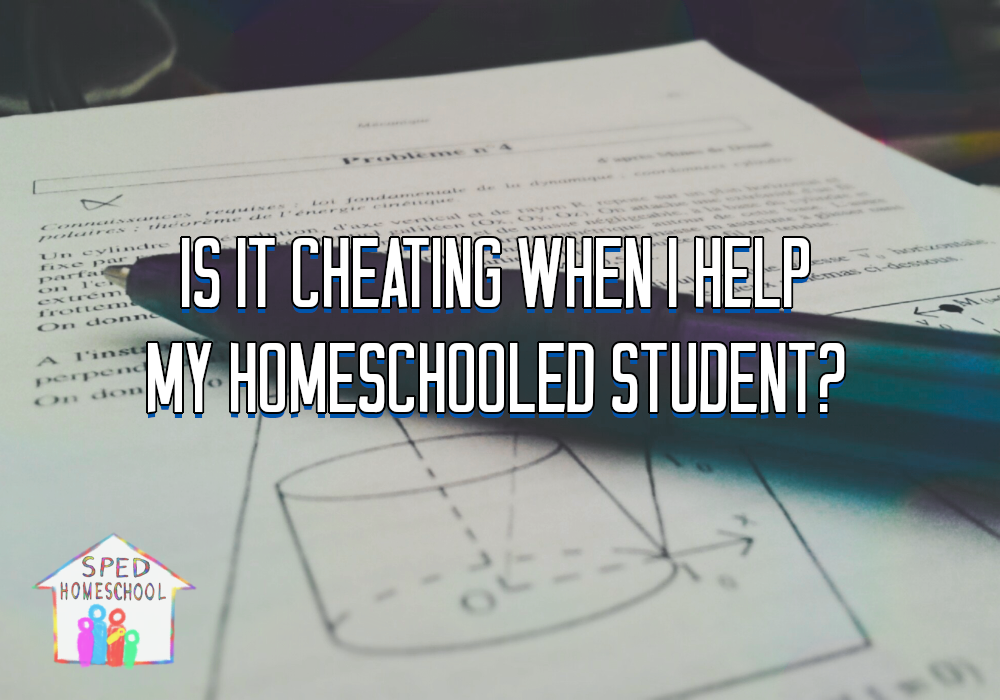 I hear a lot of homeschool parents saying they feel like they are “cheating” when they give their child an answer or help them to find the answer. As a teacher from the public school world, let me tell you that teachers give answers and help students find answers on a daily basis in the classroom! However, teachers have been trained to use different language for this process of “answer giving.”


Helping is Training
In the world of sports, a specific movement has to be repeated at least 300 times perfectly to create the proper muscle memory. If any part is learned incorrectly during this process, it can take 1500 times to re-train those muscles in order to correct the error. In academic learning, and especially for our students who have special needs, the process is similar (the number of repetitions is not as high, although it might feel like it is).

This method is usually done through a series of prompts, or “hints” that become less as the student becomes more independent at the task. Independence is definitely our goal! If a child struggles, you go back to a higher level of help, then begin to back off again. Here are six ways this type of teaching might look like:

1 – Full Physical Prompt
With a full physical prompt, you would guide the student’s hand, arm, leg, etc to complete the task fully. If the student is writing the letter “C,” you would place your hand over theirs and guide their hand through the process of writing “C.” This is also referred to as “hand over hand.”

2 – Partial Physical Prompt
This would be used to get your student started in the right direction, but the student completes the task on his/her own. If the child is presented with a letter “C” and an “A” and you ask the student to hand you the “C,” you might tap his/her hand in the direction of the “C” but allow the student to pick it up on his/her own.

4 – Gesture
A gesture could be drawing the letter “p” in the air or indicating a part of the paper or book where the child can look in order to find the answer independently.

5 – Direct Verbal Prompt
If your child was given a two-step direction: “Pick up the paper and throw it in the trash,” a direct verbal prompt would be to then give each step as they are doing it. First, “Pick up the paper,” and after they pick it up say, “throw it in the trash.” As a pre-k teacher, I would give instructions to the whole class such as “put your jackets in your backpacks,” then generally repeat it 20 times to each child individually to ensure they did it, especially at the beginning of the school year.

6 – Indirect Verbal Prompt
Teachers use a lot of indirect verbal prompts in the classroom. This is where questioning comes in, such as asking, “What’s next?” or “What else?” The psychologist Vygotsky is well known in the teaching world for his work on Scaffolding. This is a great tool for teaching any child because it helps them think through the steps. When I am doing math with my son, and he is solving an addition problem, I might ask him, “What’s next?” in the problem he is working on. I will also use indirect verbal prompts to help him stay on task when he is having trouble focusing.

Independence is the Goal
This is our goal in teaching any child. Our aim is for our children to be independent and have complete mastery of the skills we are striving to teach them. Mastery is the point at which they can complete a task completely by themselves, with no questions, no “hints,” and no prompts! When they reach this point, we know they truly understand!

How to Document IEP Goals That Use Prompting
As a special education teacher, when I wrote goals, I always wanted my students to be and feel successful from the beginning so I would write the goal to include prompts. (Download our free IEP template and check out this resource page to learn more about writing your homeschool student’s IEP.)

“John will write his name, using 0-3 prompts, successfully in 2 out of 3 trials.”

From this goal, I would have John work on writing his name. At first, I would start with hand-over-hand. Next step would be my writing it as a model for John. Next, I might form the letters in the air as he wrote them on paper. Then I might remind him directly of the letters, and then move to asking him, “What’s next?” Finally, with time, he would write his name independently. As we moved through each phase, I would make a notation on the paper each time we wrote his name and what I did to help him be successful. That way, I am able to track the progress he is making and how independently he is writing his name.

As parents, we know that our students receive assistance when they are in the classroom, but it is hard to know how much to give at home. I think at times we hold ourselves to a higher standard because we don’t want to get it “wrong.” Just know that there is no wrong way to do it. The most important thing is to document – write it down – so you know how much progress has been made and how much your child has grown!