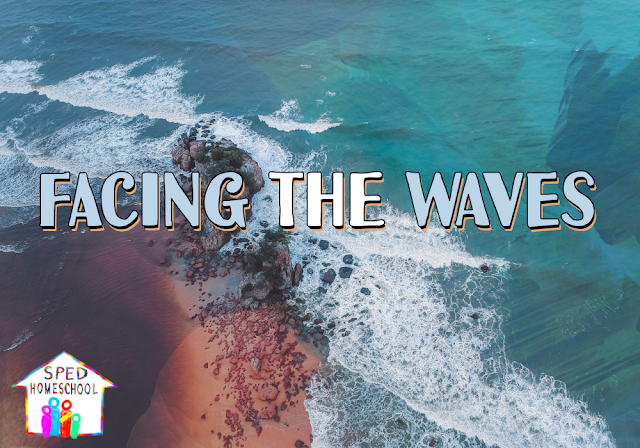 A few weeks ago I had the privilege of visiting the seashore. As I sat on the beach on two consecutive days, I observed a man attempting to negotiate the waves.

On the first day, he stood just after the waves broke, and inevitably they would knock him down. I watched as he was plunged beneath the surface, pummeled with the current, and then struggled to get to his feet. He always returned to the same spot, only to be met with the same recurring fate.

On the morning of the second day, I noticed that he ventured out a little further. At his new vantage point, he was able to dive into the waves as they crested. He remained in control of his body through the onslaught of the water and quickly regained his footing before the next wave arrived.

By the afternoon, the man had moved out even further. Now he stood in the water prior to the waves cresting. As a mounting surge of water approached him, he was easily lifted over the wave and then returned to his former place, remaining upright the entire time.

He was unaware of his spectator, but I have thought much about him since those days. It reminded me of the “waves” of life: how they come upon us and how we respond.

Navigating the Waves Upright
There are a lot of “waves” in life: the death of a loved one, the loss of a job, medical problems, divorce…nameless tragedies. They affect us each differently, and various waves in our lives can have differing ramifications. I think a lot depends on WHERE we’re standing and WHAT we’re focusing on.

When I was 12, a friend’s father introduced me to Jesus. He instructed me to start reading my Bible and praying every day. Being the compliant child I was (at that time!), I started the lifelong habit of reading God’s Word daily. Many years later, I was honored to receive the Bible that belonged to a Godly mentor who had gone to Heaven. In the back, she had recorded each year that she had completed reading through the Bible. There were about 50 dates, and that was just in that Bible (which was held together by strong tape). I attribute her Godliness to that habit she had in her life, and I believe that it has been my utter dependence on God and His Word that has kept me “upright” through the onslaught of “waves” in my own life.

“So then, brothers and sisters, stand firm and hold fast to the teachings we passed on to you, whether by word of mouth or by letter.” (II Thessalonians 2:15)

Watching the Waves and Beyond
Where that man at the beach stood significantly affected the impact that the waves had on him. Where are you standing? Are you struggling with every “wave” that hits you? Do even the smallest trials and temptations knock you off your feet, send you plundering and struggling to get up?

Even if this man was out far enough that he could dive into a wave, he had to WATCH for them! If he turned his back and was caught unaware, he surely would’ve been knocked off of his feet again! Certainly, we cannot see most of life’s challenges before they’re upon us, but we CAN have our eyes FIXED on Jesus! By being in His Word daily and praying “without ceasing,” we know where our strength lies for every “wave” and our hope for every outcome.

“Looking to Jesus, the founder and perfecter of our faith, who in view of the joy lying before Him endured the cross, having despised its shame, and sat down at the right hand of the throne of God.” (Hebrews 12:2)

Floating Over the Waves
What waves have crashed over you lately? Are you overwhelmed and exhausted? Are you concerned about making ends meet or meeting all of your family’s needs? Are you struggling with a relationship or a major decision? Perhaps someone in your family is facing a health crisis. Regardless of the “wave,” you can be assured that I AM is with you! Whatever you need, He is! Nothing you are going through catches our Father by surprise! Talk to Him, if you haven’t lately. Get into His Word, and listen to what He has to say to you. He’s going to help you float right over this wave and get your feet back down on solid ground. It’s a promise!

Are you looking for a community who will stand next to you and remind you that floating over the waves of life are not only possible for others, but in every situation, you and your family are currently facing? Then ask to join the SPED Homeschool Support group. We are much stronger when we face the waves of life together.