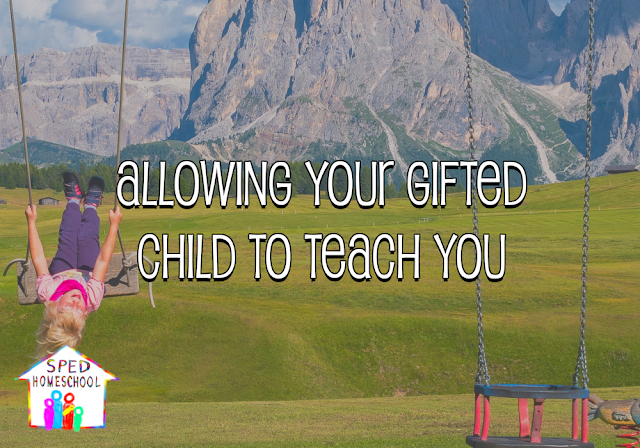 Homeschooling a gifted child has its joys and challenges.

Their intensity, their thirst for knowledge and discovery, and their asynchronicity can be difficult to keep up with, especially when it never seems to end. Eventually, in some subject or another, your child will outpace you. My son moved beyond me in math when he was 10.

By that point, I had a few choices:

Option 1 – I could spend money we didn’t have on a math tutor who may or may not know how to work with a profoundly gifted 10-year-old.
Option 2 – We could seek an online program that we might be able to tweak to meet his needs.
Option 3 – I could choose to learn along with him, alling him to teach me as part of his skills evaluation.

Learning With and From Your Gifted Child
At first, learning from your child seems like a bit of an oxymoron. Aren’t we supposed to be the teachers? How do I go about letting my child take on that role? To be clear, I didn’t allow my son to fully become the teacher at age 10. I did, however, allow him to teach me his understanding of the information.

In doing so, two main things were accomplished. First, he was allowed to dig into the information at his pace and level. He sought to learn for learning’s sake, rather than in order to pass a test or check a box and move on. Second, by having to figure out how to teach what he understood to me, he had to learn how to break it down into smaller pieces.

Gifted children are often able to take in massive amounts of information, categorizing and analyzing it quickly. They tend to retain this information wonderfully.However, it can be difficult for them to later explain it to people who don’t learn like they do. Considering the fact that the vast majority of people on earth don’t learn like they do, this can hinder them later on in life.

By being allowed to learn with and teach me, my son learned in his own way how to communicate with and really teach people of different ages, different cognitive abilities, and different backgrounds. This has been one of the largest benefits of homeschooling for him. So much of what he does today as an adult centers around teaching and strategizing to meet the needs of a wide range of people.

And, as an added benefit, I finally came to understand algebra!

Extend It Out
This pattern didn’t stop with math, or even with school subjects in general. As my son grew, he learned to tackle larger challenges. Through each of them, he has taught me so much.

He has taught me how to confront those who enjoy bullying or manipulating others. Rather than just complaining or ostracizing them, he finds the issue behind the action and addresses it creatively, firmly, and in an attitude of love.

He has taught me the value of moderation in my reactions. When a controversial issue arises, he only speaks when his words will really matter. He doesn’t react emotionally or in the heat of the moment. Instead, he analyzes all sides and responds with passionate reason.

He has taught me how to truly teach – how to go beyond imparting information to get to the heart of the matter. He’s taught me the importance of going beyond the “who?” and “what?” to the “why?” and “so what?” behind the lesson.

He has taught me how to trust in God when I can’t see a way forward. When he faces obstacles and transitions – and he faces large ones – he waits for God’s direction and acts on it without question.

He’s not perfect at any of these. He’s a flawed human being, just like any of us. But he’s willing to teach by how he lives, and he’s willing to mentor anyone who wants to learn from him.

To me, this is the best outcome that homeschooling could offer. Allowing my gifted child to teach me has allowed him to learn to become a teacher in every aspect of his life.